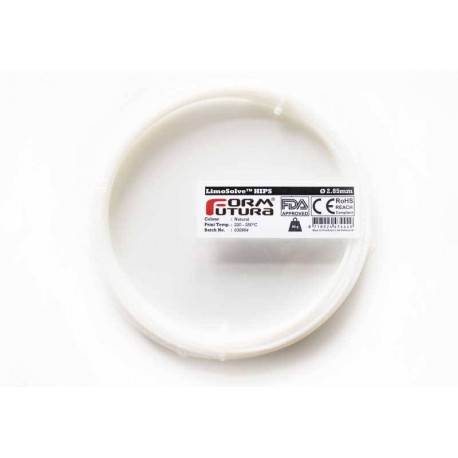 HIPS LimoSolve™ - is soluble in Limonene. But Limonene have no interaction with ABS. Solubility of HIPS in Limonene is very interesting and filament can be used as support material.

Where HIPS is one of the new kids on the block for 3D printer filaments, it has been around in other fields of application for decades. Polystyrene is one of the most widely used thermoplastic polymers in the world. Because of its characteristics with respect to hygiene, strength and heat resistance, Polystyrene is for instance extensively being used in the food packaging industry, but also for the production of e.g. disposable plastic cutlery/dinnerware and CD/DVD jewel cases.

This product is no longer in stock

No reward points for this product.

When it comes to desktop 3D printing, Polystyrene filament has very similar characteristics to ABS thermoplastic filament in terms of impact strength and stiffness and it prints very nicely too. HIPS printed parts can be sanded, primed and painted with acrylic afterwards. Besides these similarities with ABS properties, Polystyrene has however one very different property compared to ABS. As it happens Polystyrene dissolves completely in Limonene, a colourless liquid hydrocarbon that has a strong smell of oranges. Limonene however does not interact with ABS. Polystyrene’s solubility in Limonene is a very interesting property that makes PS filament particularly suitable as a support material for printing complex ABS structures. If your 3D printer has a dual extruder, you can print with ABS and PS to build structures which are impossible to make without support material. When your print is done just give it a bath in Limonene, let the Polystyrene dissolve resulting in a seemingly “impossible” creation made with a FFF/FDM desktop 3D printer. Imagine which complex structures you are now able to print….. Extremely difficult to print models, which were previously only printable with very expensive SLS printers, become available to FFF/FDM 3D printers by making use of a soluble support materials! Think about mechanical applications – such as ball bearings, ball and socket joints, and caged gear mechanisms – which are now available for printing with FFF/FDM 3D printers.

Our PS filament extrudes around 235°C and is suitable with all RepRap-technology based desktop 3D printers, such as MakerBot, Ultimaker, RepRap (Mendel, Huxley, Prusa), UP!, Solidoodle, Leapfrog, and many more….!

Our Polystyrene (PS) filament is available in a bright natural white colour and comes on a spool with approximately 750 grams of PS filament wrapped around it. Our spool-wrapped PS filaments are vacuum sealed.

• It is recommended to have your print bed temperature set to +/- 110°C when printing with High Impact Polystyrene (HIPS). You may have to adjust the temperature settings of your print bed slightly based on your type of printer.
• Do not remove the print from the build platform until the object is cooled/hardened (as HIPS remains pliable);

No customer reviews for the moment.

20 other products in the same category: